England captain Kevin Pietersen insists none of his players will be forced to return to India for the two-Test series after the terror attacks in Mumbai.

On Friday, Indian officials insisted the series would go ahead and moved the second Test from Mumbai to Chennai.

But Pietersen told the BBC: “We will make every effort to come back for the Tests, but at the end of the day if it’s not safe we won’t be coming back.

“I’ll never force anybody. A man is a man and he can make his own decisions.” 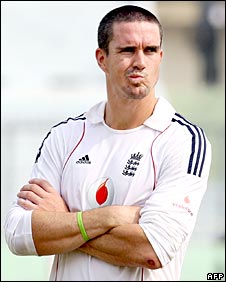 The England squad began flying home on Friday but are due to return in early December.

The first Test is set to start on 11 December in Ahmedabad and the second, scheduled for Mumbai from 19 December, was switched by the Board of Control for Cricket in India (BCCI) on Friday to the southern city of Chennai.

The Test series will still be preceded by a three-day practice match in Baroda from 5-7 December, said the BCCI in a statement. It did not say, however, whether England had accepted the itinerary.

Pietersen had earlier said that plans were being made to stage a practice match in an alternative venue, possibly not even in India.

BBC Sport understands that a warm-up match could be played in Abu Dhabi or Dubai.

“We’ll get some training in, for sure,” said Pietersen. “There are definitely talks going on, I’ll be speaking to the coach and we’ll be making plans.

“There are definitely places we have looked into in the last 24 hours.”

England were trailing 5-0 in the one-day series before the final two matches were postponed but Pietersen is eager to return to India for the Test series.

“Playing cricket in India is incredible, it’s amazing,” he said. “There is no better place in the world to play cricket because you get looked after and the grounds are full before you even wake up in the morning.

“I always look forward to playing in India and if the security is right and things are OK, we will play.”

One of the hotels attacked was the Taj Mahal Palace Hotel in Mumbai, where the England squad stayed a fortnight ago and were due to return to on 16 December.

Former captain Michael Vaughan revealed he and the rest of the performance squad would have been in the hotel when it came under siege but for a late change of plans.

“All our white Test kit is in one of the rooms at the Taj Mahal,” said Vaughan in his Daily Telegraph column.

“All the stuff was deposited there after England’s two practice games in Mumbai at the start of this tour. That’s how close the danger is.

“This week I was due to be in Mumbai with the rest of England’s high performance squad. It was only at the last minute that our training camp was switched to Bangalore.

“I don’t know why it was switched but we could have been there in one of those hotels when they were attacked.”

Pietersen admitted the players had been taken aback by events and that the decision to fly home was correct.

“It’s always a difficult decision, especially when it’s unexpected,” he added. “But I think it’s the right decision right now to get the boys out of here, to get them to their families, even if it’s only going to be for a couple of days.

“It has been really, really hard. It’s something that we weren’t expecting and when unexpected things happen you deal with them in certain ways.

“The way for us to deal with it was by having a few team meetings [on Thursday], get everybody in a room and find out exactly how people are feeling, and the team’s decision with the board was to go home.”

The England left the eastern city of Bhubaneswar for Bangalore on the first leg of its journey home on Friday.

Security forces cordoned off the arrival lounge at the Bangalore airport, and the team were escorted to a city hotel to await their homeward flights.