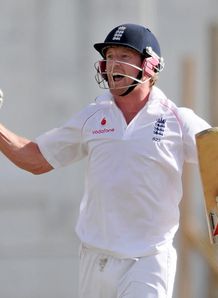 Collingwood made 113 to allow the tourists to declare their first innings at 566-9 on the second evening of the hastily-scheduled third Test.

Steve Harmison then removed Chris Gayle to leave West Indies at 55-1 in reply and facing a long road to survival over the course of the final three days.
Pitch issues

The hosts’ task is unlikely to be aided by the pitch, which had been prepared in just 24 hours following the abandoned second Test at the nearby Sir Vivian Richards Stadium on Friday.

Having held up well as Andrew Strauss plundered 169 and England reached 301-3 after being asked to bat on Sunday, the playing surface began to show signs of uneven bounce as the second day wore on.

Collingwood had arrived at the crease in the second over of day two when nightwatchman James Anderson (four) edged behind off Fidel Edwards (2-75).

The Durham batsman was fortunate to survive his first ball, gloving a short delivery from Edwards over the slips, but thereafter took charge despite the increasingly unreliable bounce of the wicket.

Collingwood dominated a stand of 94 either side of lunch with Kevin Pietersen, who never looked comfortable while crawling to a half-century off 131 balls.

West Indies briefly got themselves back in the contest when Jerome Taylor – battling injuries to his ankle and hip – produced a double wicket maiden in the eighth over of the middle session.

Pietersen was bowled via the inside edge for 51 and, two balls later, Andrew Flintoff had his middle stump uprooted by one that kept low.

But Collingwood marshalled the lower order in expert fashion, adding 62 in the company of both Matt Prior and Stuart Broad.

Prior reached 39 from 61 balls before holing out to mid-off shortly before tea to become left-arm medium pacer Brendan Nash’s maiden Test scalp.

But there was no respite for West Indies in the final session as Collingwood closed on three figures, eventually reaching the landmark – his third hundred in nine Test innings – off 183 balls including 13 fours.

From that point England chased quick runs to set up a declaration. Part-time left-arm spinner Ryan Hinds (2-86) had Broad caught behind attempting to cut for 44.

And when Collingwood holed out in the deep to same bowler to end a 202-ball stay, England captain Strauss declared to give his fast bowlers 15 overs to make inroads.

His opposite number Gayle decided to go on the attack against the new ball and had struck five fours and a six to reach 30 from 32 balls before Harmison intervened.

The left-hander top-edged the first ball of the over out of the ground and followed up with a baseball-style pull for four.

But Harmison (1-18) persevered and was rewarded when Gayle got carried away and carved an extravagant back-foot drive straight to Anderson in the covers.

Daren Powell (two not out) was sent out as nightwatchman to join Devon Smith and the pair safely negotiated the final four overs of the day.

West Indies will resume on Tuesday still along way from avoiding the follow-on as they look to preserve their 1-0 lead in the now five-match series.